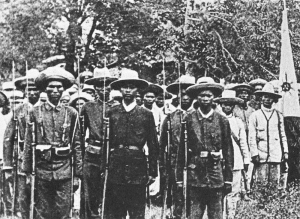 Captured Katipunan members (also known as Katipuneros), who were also members of La Liga, revealed to the Spanish colonial authorities that there was a difference of opinion among members of La Liga. One group insisted on La Liga’s principle of a peaceful reformation while the other espoused armed revolution.